Johannesburg from the air 1931

While I finish up the first part of the history of Braamfontein, here is some vintage aerial footage of Johannesburg showing some edges of Braamfontein.

Old aerial views of Johannesburg are hard to come by and sometimes tricky to pinpoint the location. The reason is that the city has been re-built so many times – the old demolished to make way for the new – that only a few historic buildings remain to act as a reference.

This video from the recently released archives of British Pathe shows a film taken from a plane in 1931 that flew over the city. I’ve managed to find a few old landmarks to help put some of the footage into perspective.

0.14 – This is Zoo Lake looking south-west across Parkview with the golf course in the middle and under-developed Emmerentia and Greenside just beyond. Further in the distance would be Melville Koppies, Rustenburg Road, Auckland Park, Cottesloe, Brixton, and mine dumps. One doesn’t see the city in this shot due to the angle. My reference is the shape of Zoo lake and the position of the island as well as the triangle streets to the right which is where Parktown Girls is.

Aerial view of Zoo Lake. The shape and position of the island match the footage

0.22 – The plane swings around and looks down in an easterly direction on the library building across the open circular area where the Cenotaph stands (unveiled by the Earl of Athlone on 10 October 1926). The open areas including the library and City Hall was the original Market Square seen in many old pictures of Johannesburg. Beyond that is the back of City Hall followed by the Rissik Street Post Office. Johannesburg’s oldest standing pub, The Guildhall, would be across the road on the right from the back of the open space where City Hall starts.

Cenotaph in what was once Market Square 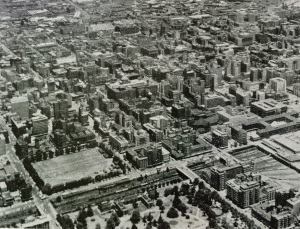 0.48 – The plane has swung around and now in the foreground is the original Wanderers Stadium right next to the Johannesburg Station with the Union Ground behind to the right just across the tracks looking east. It moves around focusing on the train station which in the 1940s would take over the Wanderers. To the north (left) of the Wanderers is Braamfontein and specifically, an area once known as Clifton. 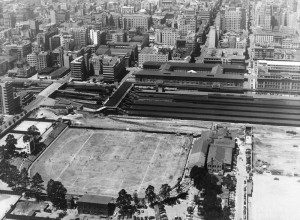 0.57 – 1.10 – This appears to be a view of the city looking south with the Jeppe Street post office (the big block) and the Law Courts with the dome just behind it.

1.11 – Now looking just south of the Johannesburg railway station. The open park with a cross in it is Plein Park (also known as Atwell Gardens). This is where the old telephone tower once stood as well as the ‘tin temple’ which is where Johannesburg’s municipal offices were situated. They were literally a collection of buildings made out of corrugated iron. These were demolished in 1930 after the new City Hall (seen earlier) was completed (in 1915) and the offices moved. It looks as though it’s been transformed into a park post the ‘tin temple’ demolishing. The big building in front of it is the main railway station building (although it’s not seen in the picture below)

Plein Square from the 1950s

The Tin Temple with telephone tower before being demolished

1.24 – This looks like a westward view toward the Newtown area. Those long buildings look like the old potato sheds which were near the original abattoir. 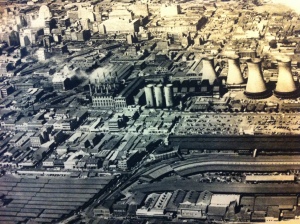 Aerial view of Newtown form 1930s. The sheds in the bottom left are the ones seen from the opposite side in the film

1.28 – The shot moves south toward the Standard Bank building on Harrison Street with Commissioner Street running across the front at the bottom. At least I think so. I’m not entirely convinced this is correct.