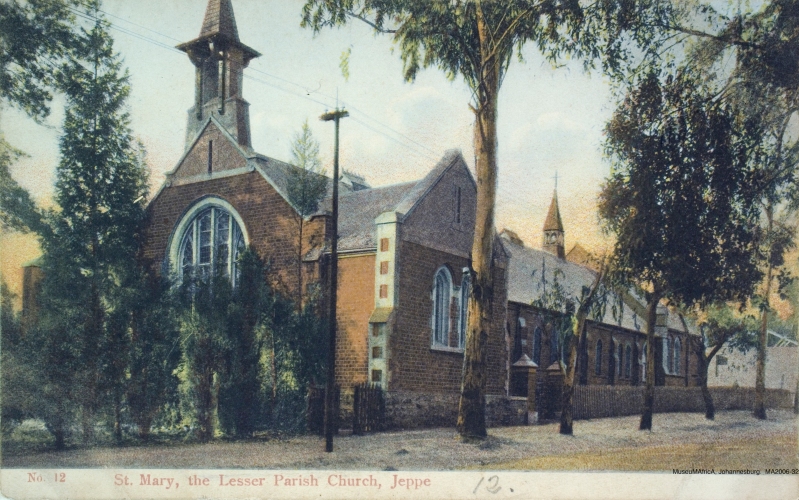 In the 1890 map, one can see the original layout before the railway line, Belgravia to the east and other surrounding areas like City & Suburban and Wolhunter. Commissioner Street is still called Natal road and there is a little stream and lake called Natal Spruit.

The 1896 map shows the growth that took place in just 6 years.

This is considered the oldest original (mostly) surviving building in Johannesburg not counting the various farmhouses that pre-date Johannesburg.
Its competition was a shop in Doornfontein with 1887 above the door, but the shop has no building plans or early ownership records to prove its case. It has since also been greatly modified.
Bettelheim Mansion in Beit Street Doornfontein is another contender. Although built a year earlier in 1888, the house has been modified over the years and only a portion of the original exists.
A recent contender that came via an ‘oldest buildings in JHB list’ on Heritage Portal was the Bree Street Police Station evidently from around 1887. Doing some digging I found that early maps pointed to the police station being a customs house located near to the railway yards. In later life, it appears to have been the first headquarters for the traffic department. Regardless, the original building has been demolished and St. Mary-the-Less has retained its status.

From the centenary booklet dated 1989: ‘St. Mary’s was the first Anglican church to be built in Johannesburg. It is the oldest surviving building in the city as far as we know and certainly the oldest church still in use’ It was designed by Arthur and Walter Reid and can seat about 120 people.

The foundation stone was laid on the 10th of September 1899 by Mrs John Darragh (Wife of the famous Reverend) immediately after their wedding. There is no record of services being held before Holy Week 1891.

The organ was commissioned from the British firm Morgan & Smith in August 1908 at a cost of 525 Pounds. It was overhauled in 1979 at a cost of R7000 and is considered one of the finest in Johannesburg.

Fritha Hennessy sent me a picture of Albert Lee whose name appears on the above donations list. He was the brother of Mary Lee who was Fritha’s great-grandmother. Albert was a sub deacon at the church from 1914 to 1918, when he died in the Flu epidemic. The parishioners donated the statue of Mary in his memory after his death.

The first church bell lies at the bottom of the Atlantic Ocean after the ship (Alnwick Castle) it was returning on from being recast was sunk by a German torpedo during WW1. On the inside of the new bell is inscribed, ‘St Mary’s Jeppestown, Recast 1917, Sunk on Alnwick Castle 19 March 1917, Replaced by insurance January 1918’

Initially known as St Mary’s Church Jeppe, it bowed and took the lower status (the-less) after St. Mary’s Cathedral was built in 1929.

There is another church in Johannesburg known as St. Mary’s on the Limpopo. It changed its name in 1982 from the Cathedral of St. Mary the Virgin in recognition of the Braamfontein Spruit which runs under the church on its way to the Limpopo. It’s a little church tucked away between a block of flats and Brenthurst Clinic on the corner of Empire Road and Clarendon Place. More on churches in Johannesburg HERE and HERE.

Although not religious myself, I couldn’t help but feel humbled by the grace, ambience, and history of this little old church. It has seen most of Johannesburg’s history and still stands despite all the changes and progress.

The arrow shows the church-top hidden behind buildings and warehouses. The picture was taken from the rooftop of one of the Maboneng buildings during a Sunday afternoon DJ set in 2012.

The open park opposite the church was originally known as Jeppe Park. It was re-named Gilfillan Square on 19 December 1939 and named after Douglas Flemmer Gilfillan, a well-known solicitor who once lived in Belgravia and the corner of Mars and Robinson Streets.
Some early buildings near the park were the first Jeppe Library which opened on 17 August 1896 that stood on the corner of Jules and Janie Streets. The library, sponsored by the Ford & Jeppe Estate Company, was the only suburban library in Johannesburg prior to 1939.
Across from the library was Carl Jeppe’s house (Julius’ brother) and at 13 Janie Street.

Diagonally across the road to the south of the library, was the first Roedean School premises started by Miss Lawrence and Miss Earle in a house before it moved to present-day Parktown Houghton. Roedean started with 22 pupils in this house in January 1903. All have been demolished but the park still stands. It was refurbished in 2018 as a playground.

Wesleyan Church in Jules Street Jeppestown (also known as the Victoria Society) was designed by A.E & J.H. Till and built in 1898. Not much was known about this church but recent research (Oct 2016) has uncovered that the dwindling congregation moved to the Kensington Methodist Church in 1987.

The church was all but missing until Gary Walker alerted me to the shell of a church on the corner of Jules and Hans Street. The entire top half is missing.

The new research on early Methodist history in Johannesburg also mentions the ‘Victoria Church’. This was a Methodist branch that opened a wood and iron church in the vicinity of Commissioner Street and John Page Drive in 1897. It burnt down and a new church was built in 1898 and renovated in 1935. The records indicate that J.H. Till was the architect of the ‘Victoria Church’ which means this is the same church. Till was heavily involved in Methodist affairs. He died in 1956 at the age of 91.

In the book ‘Daughter of yesteryear’ by Alice Ralis and Ruth Gordon, a story is told of a Wesleyan church hall in Jeppestown which burnt down on Guy Fawkes night. The congregation was moved to a temporary wood and iron church hall while a new church was erected on the site of the old one. I suspect this is all related.

Next door to the church stood the Wesleyan Day school also designed by the Tills that was built in 1898. A school hall was added in 1943. The school buildings were demolished for a petrol station and the church became a panel beater. This was likely around the mid-1980s after the congregation moved.

The Masonic Temple in Hans Street dates back to 1896 and was designed by Franke Goode for the Jeppestown Lodge No.2481. The Ford & Jeppestown Estate company donated the stand for the building. The site back then, still mostly rural, was full of blue gum trees that had to be cleared prior to construction. Many of the early members lived nearby. In 1978, it was the oldest Masonic temple of the English Constitution still operating in the district. It was sold around the same time for R19 000 to the District Grand Mark Lodge of South Africa.

It appears to have stopped functioning as a Masonic temple in the 1990s, presumably as the area went into decline. Today, it is the oldest surviving building with Masonic connections in Johannesburg, although the building has been altered over the years.

Order of Oddfellows was a masonic order started in England in 1730. The SA charter came from a breakaway known as the Independent Order of Oddfellows Manchester Unity from 1810. The Loyal JHB lodge was formed from the remnants of Kimberly after the population left. The building was likely built after 1902 but no later than 1910 and owned by the Loyal Pride of Jeppestown. Although the Jeppe report from 1893/4 mentions a lodge, it couldn’t have been the Masonic temple mentioned above, so it’s possible it was Oddfellows hall. The Masonic lodge may have also been using another hall or building prior to 1896.

The building still stands in Commissioner Street and belonged to the Salvation Army for many years. It is now a Universal church.

A little further up the road on Main Street is an unassuming Art Deco block of flats with a small concrete plinth. By chance, I came across the story behind this.

The building was once the head office of V. H. Matterson & Son Ltd, importers of beer, spirits, and wine who started out in 1851 in Pietermaritzburg. Charles, the son of John, came to the Rand in 1886 to expand the business. He was also one of the early members of the Rand Club.
The Foster Gang famously broke into their Boksburg premises to access the bank next door.

The Main Street building looks to be 1920s in design with the addition of a second floor in the late 1930s. Note the barrel resting on the plinth in the two early photos.