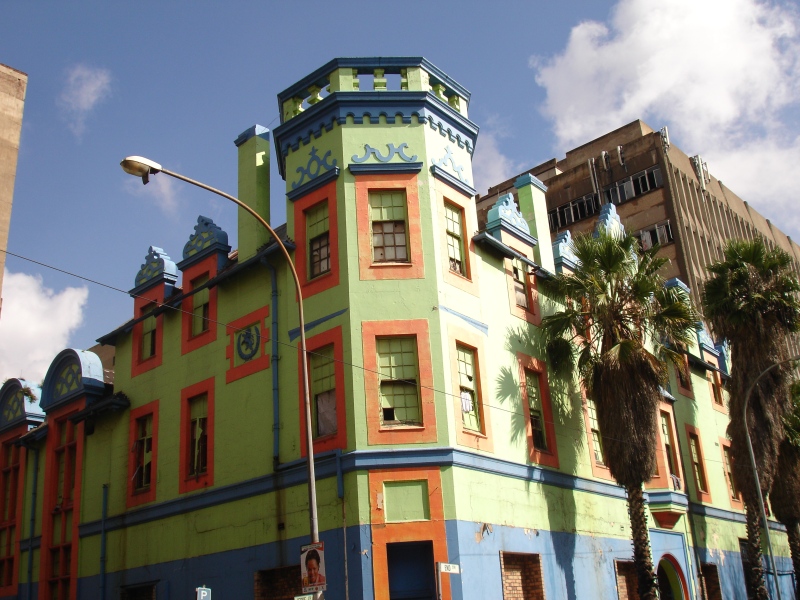 On the very edge of old Doornfontein running North to South is End Street – so-called because that was literally where the town ended. What was to become Doornfontein on the right was then just grazing land. The top part of End Street running from the railway line right up to Saratoga and what we now know as Nugget Hill was known as End Park. It’s the triangular collection of blocks to the left of the yellow line and was granted freehold status on condition it was ‘used for purposes incidental to and connected with the amusement and recreation of the inhabitants of the town’. In 1894 is had 3 tennis courts. The bottom section is still a park today.

Just north of Beit Street across the road from Norman house was a flower park known as Doornfontein Park. 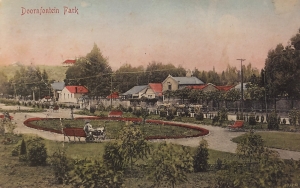 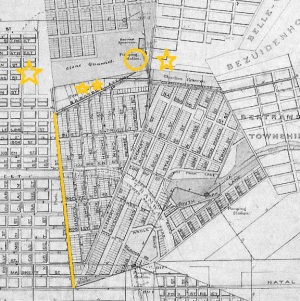 Map showing End Street in yellow. The triangular blocks running next to the top end of End Street is the park (Source: Watershed Town)

Norman House stood in End Street with its entrance on Davies Street. Some sources indicated that it was built by John Dale Lace. Others say Barney Barnato lived there in 1897 with John Dale Lace purchasing the mansion later. A report by the JDA says “The extant mansion called Norman House (Dale Lace House or Norman Nursing Home) opposite Doornfontein Park and adjacent to the Irene Church with its front entrance on End Street, was built in 1893 by the JCI for its founding member Barney Barnato. This later became the residence, albeit for a short while, of José and John Dale Lace.” The report is dated May 2005 and the home was demolished sometime between 2005 and 2013. It became the Norman Nursing Home and the Dale Lace House for senior citizens in the last few years of its life.

During the Lace’s time in the house, it was regarded as the perfect upmarket Johannesburg home. It was said to have a bath, that at a touch of a button, would ‘slide into the bedroom for added convenience’. Mr Lace demonstrated this one day to a group of friends while his wife Josie Lace was still in the bath. The visitors were evidently impressed. 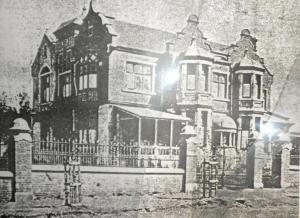 Norman House in the early 1900s

Keeping on End Street Just across Beit Street is I. H. Harris Primary School which started out as the Jewish Government School. The original school was connected to the old Park Synagogue ‘Jewish School of Johannesburg’ on the corner of De Villiers and Joubert Street which was built in 1896 and opened on 14 July 1897 by the Chief Justice J. Kotze. It was a three-story building with a hall on the ground floor. By 1907, it had 500 pupils but was overcrowded with the building itself regularly condemned by engineering and health authorities.

The old school was sold after the servitude on the land was removed. Land was bought in End Street near the Doornfontein Station in 1913 (S. A. Jewish Chronicle 24 April 1914) with the school built the following year. The school continued to be run by Mr. Abrahams, who had come out from London under Lord Milner. It was only in 1925, when Mr. I. H. Harris succeeded Mr. Abrahams, that the name of the school changed. Harris arrived in Johannesburg in 1905 also under Lord Milner. Of interest is that Hebrew instruction was sporadic and by 1918, amounted to an hour a day. By the late 1920s, the school was a regular English medium primary school. 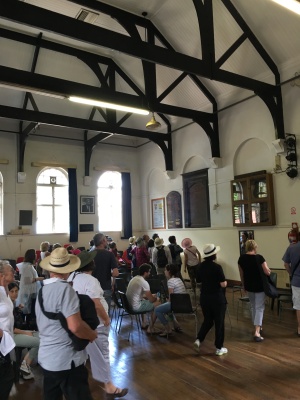 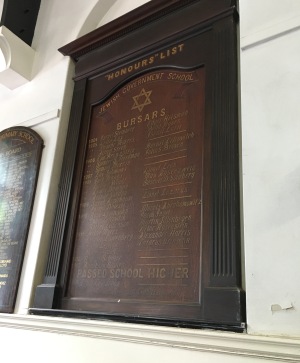 On the opposite side of the track on End Street stood the Doornfontein (or End Street) Club, a men’s social club built by Sam Height in 1888. The club, which is reputed to have had a dining room that could seat 750, was too lavish and expensive and was soon sold to Mother Ambrose of the Order of the Holy Family who turned it into the End Street Convent. This was the precursor to the Parktown Convent which was completed in 1905. The site today, across from End Park, is a high-rise building that was once headquarters for Nedbank. 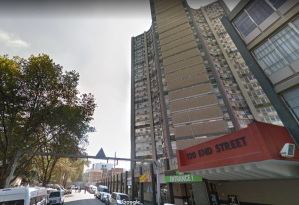 As the wealthy randlords moved north over the hill to the new and more exclusive suburb of Parktown in the late 1890s and early 1900s (Barney Barnato built Barnato Park in Berea and John Dale Lace built Northwards in Parktown), many of these Doornfontein mansions – being too big and expensive to own or run on a modest income – were torn down and the land subdivided on which new houses or buildings were erected to accommodate a larger middle-class population.

One such example is the Herbert Baker designed S.A. School of Music built in 1906 on what was the former tennis court of “leading businessman” Mr. Morris Rosenburg situated at 96 End Street. Its foundation stone was laid by Lady Farrar, wife of Sir George Farrar, on 26 January 1906. The building also served as a macaroni factory from 1926 before it was restored into the Adam Leslie Theatre in 1967. At one time, it was the only unplastered brick gable building in the Transvaal. 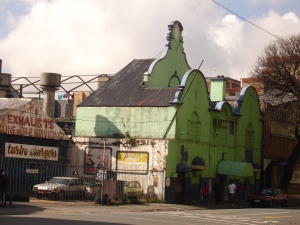 On 20 August 1976 it became MANDY’S – a nightclub that saw through 70s disco and the 80s HI-NRG eras. The original MANDY’S burnt down within a few months of opening (possibly by a competing club). It was soon re-opened under new management as the NEW MANDY’S, which is the MANDY’S most people know.

In 1986 it became IDOLS (with Larry Nathan manning the door RIP). 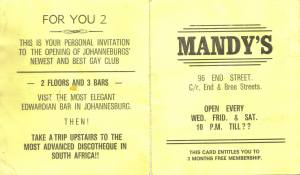 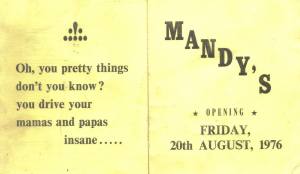 The other side of the flyer (Source: Andrew Wood) 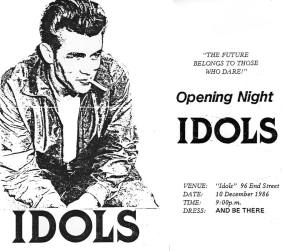 I went to Idols a couple of times in 1989/90. It was two blocks away from THE JUNCTION which was more my thing (and the club that would have a lasting impression on my music taste and DJ career). Sometime later in the 90s after IDOLS, it became another popular dance club called ESP. Again, a legendary place and famous for going on non-stop right through to Sunday night. All three clubs were icons of their respective scenes and are fondly remembered by all who went there. I have a 90-minute tape from one of the nights at IDOLS and a bunch of old disco records with the MANDY’S stamp like the example posted above. But I digress…

As of 2018, the building has been partially restored and turned into a crèche with two small businesses running out of the ground floor. The owner wants to rebuild the back-end in the future. The gabled brickwork has also been exposed for the first time in 40 years. 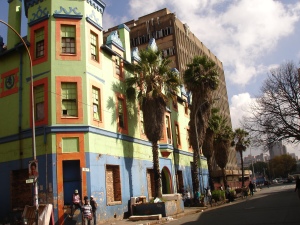 Caledonian Hall built in 1905 on the corner of Jeppe and End Street from 2011 (Source: Marc Latilla)

It was formerly the headquarters of the Johannesburg Caledonian Society up until 1939. It’s foundation stone was laid by Caledonian Chief A. Dickson on September 2, 1905 and it’s said that every brick and stone of the castle-like building was brought over from Scotland. The building was in the Scottish Baronial style and was designed by Leck & Emley. It has served as an entertainment hall, catering establishment (Ginsberg Caterers), a warehouse, a carpet business and was also a popular nightclub in the late 80s or early 90s called Club Babylon which featured three floors all playing different music. I recall that it may have even been home to a club called IT in the mid-90s.

The building was unfortunately destroyed in a fire in March 2012. It stood up until 2014 as there was a possibility of a restoration. The facade was in an okay condition, but the roof was destroyed and the floors had all collapsed. As of 2015, what was left of the ruin has been completely demolished. 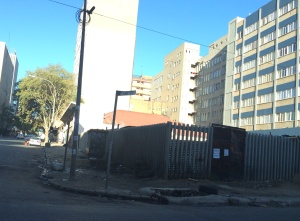 Site of the Caledonian Hall in 2015 (Source: Marc Latilla)

Some general views of Doornfontein: 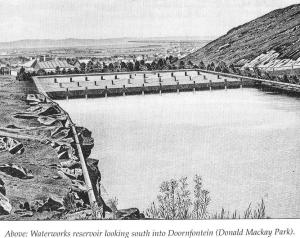 View of Doornfontein from the water reservoir behind where Ponte now stands 1890 (Source: Watershed Town)

The reservoir was built by the Johannesburg Waterworks Estate and Exploration Company in 1888 at the source of the Jukskei. The stream ran down what became Harrow Road and down to a marshy area (which later became Ellis Park Lake) where Ellis Park stadium is today. Then it meanders through Bertrams, Lorentzville, Judith’s Paarl, Bez Valley, Bruma, Observatory and down to Gillooly’s Farm where it goes left around the hill towards Alexandra Township and beyond. 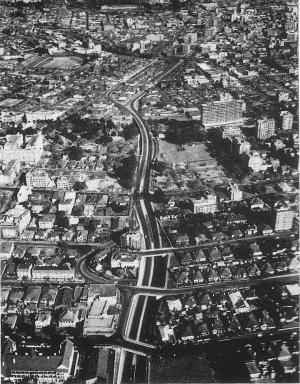 View looking South with Doornfontein in the background before Ponte was built. This is after Harrow Road was widened around late 1960s (Source: Johannesburg Saga)

Special thanks to Andrew Wood for the old comps. He has scanned and shared many old comps, flyers and club-related newspaper articles from the 70s and 80s from his extensive collection.

Katz, M. E. 1980. The History of Jewish Education in South Africa 1841-1980. University of Cape Town. Doctor of Philosophy in Education