The well-heeled of the population were not satisfied with living in the small houses on blocks laid out by the town planners near the mines and noise and dust of the new town. Although the wealthy and influential were centered around Noord Street (technically the first ‘Millionaire’s Row’) near where the Rand Tram and the early Park Station would eventually cut through, it was still too close to the hustle and bustle. Some famous pioneer names connected with Noord Street and surrounds: Edouard Lippert, Henry Nourse, Solly Joel, Hermann Eckstein, Lionel Phillips, and J. B. Taylor.

1890 map of Doornfontein showing mismatch of roads and highlighting the position of houses in this post. The circle is where Ponte is today

At this stage, Old Doornfontein was larger than the early laid out Randjeslaagte township and the cross-streets of the new suburb did not link up with the street grid of Randjeslaagte. The long orange line on the map below is End Street which illustrates this.

The Doornfontein stands were bigger and ran in a north-south fashion up to the slope. Running in front of the slope was Saratoga Avenue which became Johannesburg’s first millionaire’s row.

The first house on Saratoga Ave at No.3 Doornfontein 1887 (Source: Johannesburg – One hundred Years)

Note the two pictures above show the same house roughly 5-7 years apart. This would have been about 200 metres from the foot of Nugget hill today around where the cross-shaped Catholic Church stands. The house (No.3 Saratoga Avenue) belonged to a Mr. Struben and was also the first house to be supplied piped water from Johannesburg’s first reservoir in Harrow Road a few hundred metres away. Actress and champion lady cyclist Amy Fenton (also known as Mrs Colin Watson) lived next door at No.5 Saratoga Avenue. 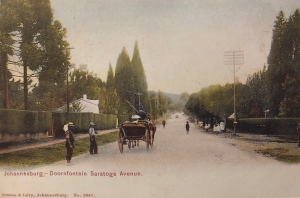 Saratoga Avenue from the early 1900s (Source: A Johannesburg Album)

No.1 Saratoga Avenue was Clyfton House, the mansion and home of Henry Nourse and his family for over 60 years. I suspect No.1 and No.3 were part of the land the current Catholic Cathedral was built on in the 1950s.

Saratoga Avenue was established by the American Sam Height who built his own double-story home ‘Saratoga Villa’ on the Avenue in 1889 (designed by Canning & Goad). The position is not immediately clear, but it appears to have been at 22 Saratoga Avenue which is roughly halfway between End Street and Harrow Road which is now a parking lot within the UJ Campus. It is also said to have been closer to Harrow Road.

Sam, and his wife Louisa, owned Heights Hotel (corner of Commissioner and Ferreira Streets) and created a small farm near their property to grow fresh produce for the hotel. Water came from the stream running down Harrow Road which would in 1888 become the first reservoir to supply piped water to the town. The house was later acquired by Colonel Frank Rhodes, brother of Cecil Rhodes.

Height also started the End Street (or Doornfontein) Club in End Street which was later purchased by Mother Ambrose, head of the Order of the Holy Family, who converted it into the End Street convent.

The owner of Doornfontein farm, Fred Bezhuidenhout, leased land to the Waterworks Company who under the direction of James Sivewright, built the reservoir. The foundation stone was laid in September 1888 by Mrs Von Brandis. It was this, coupled with the planting of trees and laying out the roads, that started attracting the wealthy buyers.

Randlords John Dale Lace, Eckstein and Reunert built their mansions there. Reunert built Windybrow in 1896 and it still stands today although technically it’s not on Saratoga Ave but slightly above in Ockerse Street. Barney Barnato had a mansion in End Street and George Albu had one in Pierce Street. 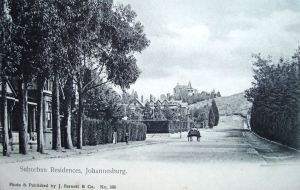 Looking south down Nugget Hill with Warrington Hall on the right. Windybrow adjacent out of shot late 1890s

The above two shots show different views of the same street. Note that Nugget Hill had not been built yet. The reason why you can’t see Warrington Hall in the first picture is that the house is set back on the property. Only the front hedge is visible. More on Warrington Hall HERE.

These next two pictures are of the only other remaining houses on Saratoga Avenue on the Berea side. 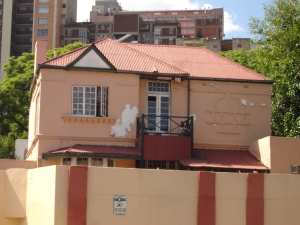 Windybrow and the other two houses from the recent photos are the only ones that still stand on Saratoga Ave. The other houses on Harrow road from the pictures below including the one on the hill (Eastington) have long gone. Opposite the house in the hill stands now Ponte which was built in 1975. The park on the left as one comes up Harrow road immediately after Ponte (Donald Mackay Park) was the site of Johannesburg’s first water reservoir dating back to 1888.

The pictures of Harrow Road show a Victorian mansion called ‘Eastington’. In its place now are foundations of an unfinished church. 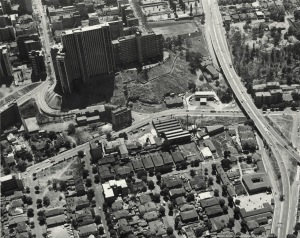 Saratoga Avenue after the Harrow Road flyover but before Ponte was built in 1975 (Source: Museum Africa)

Zooming into the picture above and moving along Saratoga Ave will show what the two remaining houses I posted earlier looked like in the late 60s/early 70s when this picture was taken. The houses in the foreground are mostly gone (except the coffin-shaped structure) and the area is part of what was know affectionately as WITS Tech – now UJ (University of Johannesburg)

It was at the 1960 show that an assassination attempt was made on Prime Minister Verwoerd by cattle farmer David Beresford Pratt, whose family were members of the show and donors of the Arthur Pratt Memorial Trophy. Click HERE for the Pathe news report of the attempt. Pratt, who was an epileptic was found to be mentally disturbed and was unable to plead. He was committed to a mental institution where he subsequently committed suicide.

Pratt’s family also owned a sweet factory in Doornfontein on Saratoga Avenue known as Crispette & Candy Co. The building, which still stands, is across the road from Ponte and near the ‘coffin building’ on the UJ campus.

Crispette was founded in 1918 and the first factory set-up on the premises of the last farm in Doornfontein (presumably the Viljoen farmhouse).

The factory was rebuilt in 1935 after the Pratt’s took over the business. Crispette manufactured an extensive range of sweets and chocolates. During WWII, they shipped a quarter of a million tins of butterscotch for the men and woman of the U. D. F. The tins were stamped with medallions of General and Mrs. Smuts and had the springbok outlined by the red Victory V.

The façade of the building was demolished when Saratoga was widened for the bus lanes around 2010. 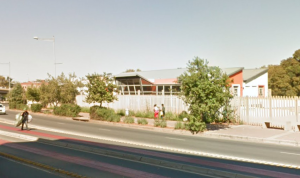 What remains of the factory in 2015 (Source: Google Earth) 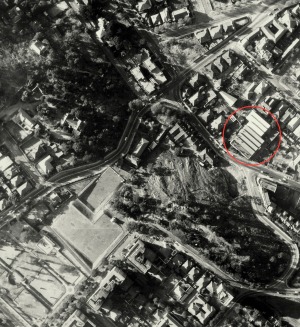 An aerial view of Ponte from the 2000s