In 1891 the first horse-drawn tram moved out of market square and soon connected to such ‘far-flung’ suburbs of Belgravia (via Jeppestown), Fordsburg and Doornfontein to the growing town.

According to the ‘Director’s Report for the year ending 31 March 1894′, “421 buildings have been erected, including 2 churches, Masonic Temple, Club House, Library, St. Mary’s Collegiate for girls, Police Barracks, etc., etc.; of these 192 went up during the year 1893. The two Parks originally laid out are well maintained and are a source of great attraction. A third square, 450 x 450 feet, has lately been enclosed and planted with trees; this has been given to the inhabitants in lieu of the original Market Square, which was cut up by the railway and partly expropriated by the Netherlands Railway company.”

In 1897, Jeppestown was described as having ‘the most amenities and the best area’ and ‘a neat little suburb on the outskirts of town proper’. Besides the horse trams and later in 1906 the electric trams, the other early benefit was that the government bought some of the land from Jeppe for a railway (the early Rand Tram) to pass through. He agreed on the condition there was a station and that every train that passed through had to stop. This was advantageous in that a business hub grew around the station as well as being very convenient for the suburb’s residents. This hub is probably responsible for the survival of so many buildings in the area.

John Page Drive was built over the original street level railway tracks when Jeppe station was rebuilt and the new tracks dropped below street level in the major construction between 1937 and 1939. Page was Mayor from 1938-39.

The first St. Mary’s school, established by Rev. J. Darragh in 1888 was in Park Street adjacent to where St. Mary-the-less is now. It was headed by Miss Mary Ross who married the Reverend on 10 September 1889. Directly after the wedding and in the presence of 800 guests, the new Mrs. Darragh laid the foundation stone of St. Mary-the-less which today is Johannesburg’s oldest building.

Mrs. Holmes-Orr took over the school in 1889. By 1890 the school has 58 pupils but was struggling financially. Through some extraordinary fundraising, the school was saved.

In 1893, Holmes-Orr bought the school. The children were sent away for the duration of the Boer war and the school was damaged by a nearby factory explosion. After the war, expansion plans for the railway line running through Jeppestown effected the school. The site was expropriated and appropriate compensation paid. Holmes-Orr, with an additional loan from her brother-in-law, built a new school on the corner of Berg and Marshall Street. 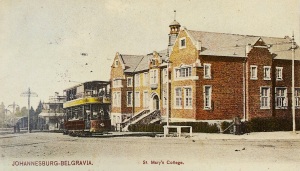 It was designed by Mr. St. J. Cottrill of Messrs. Brown & Cottrill. The foundation stone was laid by Archdeacon Furse in November 1903 and the building completed in 1904.

It’s a good example of Free Style Classicism and Collegiate Gothic style that was popular for school buildings in Victorian times. It originally had red brick walls as pictured above. There was a basement level and above that seven classrooms, Miss Holmes-Orr’s office, the kitchen, dining room, and a small library. The first floor consisted of the dormitories and the top floor was an attic. 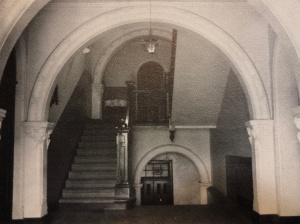 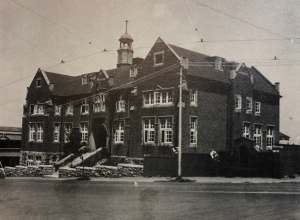 In the 1920s, the school faced dwindling pupils and more financial woes. In 1923, with only 13 pupils remaining, it was taken over by the Sisters of St. Margaret from East Grinstead, putting it under the patronage of the Anglican Diocese (something Holmes-Orr tried unsuccessfully to do a few years prior, but was denied as her debt was to heavy. She retired in 1924). In 1929 Miss Evelyn Beatrix Darke became the new headmistress.
The school sold the building in 1933 and moved to the current St. Mary’s in Waverley in 1935. 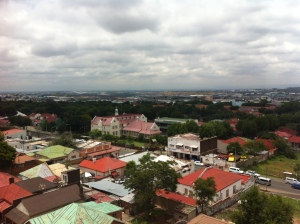 View of the back of college and Salisbury House from Fairview fire tower 2014 (Source: Marc Latilla) 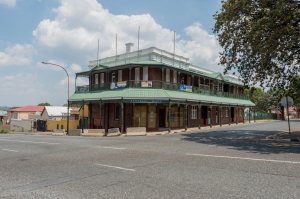 Mr. Anderson, a chemist, bought it in 1908 and renamed it Salisbury House after a teacher, Miss Kate Salisbury from across the road at St. Mary’s Diocesan School. She soon became Mrs. Anderson. The chemist survived until the 1970s.

The building has been used in two South African films: ‘The Foster Gang’ and ‘The Cavaliers’. In 2006, the building was renovated and is now used by the School of Practical Philosophy. 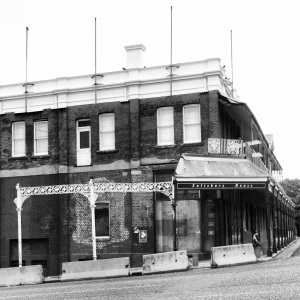 Salisbury House from 2012 with a collapsed balcony after a car accident. 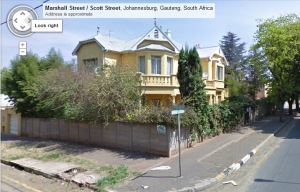 Beardwood’s House on the corner of Marshall and Scott Street (Source: Google Earth)

Rathmines was the home of Irish architect John Francis Beardwood who came to Johannesburg via California in 1895. He designed Parktown Convent on Oxford Road and Nazareth Home in Yeoville. He also worked on additions to Kensington Sanatorium (now clinic) and St. Mary’s College. In 2014 I came across a collection of old plans and found that Beardwood was also listed as architect for St. Agnes Mansions in Plein Street as well as Patlansky’s Corner on the corner of Joubert & Jeppe Street.

Built in 1903, ‘Rathmines’ was named after the suburb in Dublin where he and his family lived.

The Beardwood designed Kensington Sanatorium was just over the hill from his home and founded in 1905 by the Sisters of the Holy Family. Still stands today although it has been added to over the years.

The Beardwood designed Nazareth Home in Webb Street in Yeoville 1895. Part of this building still stands after the main block was demolished in 1986

Built in 1903 by builders Arbarren & Freely it was originally called Villa Belgravia and owned by Charles Marx who was chairman of the Johannesburg Turf Club. In 1920 it was bought bt Mr. Errol Hickman who renamed it Thabana House and ran it as a residential hotel. In 1947 it was taken over by the YMCA. In 1956, Mr L. S. Jones bought the property and restored it (it had deteriorated so badly that Jones had to access it from a broken window) to become a private hostel for Jeppe Boys. By 1958, boarders increased enough for it to become a ‘school house’, and has since been known as Sable House. 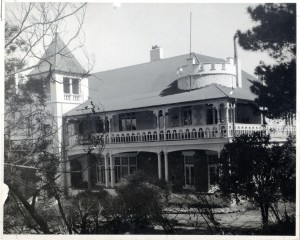 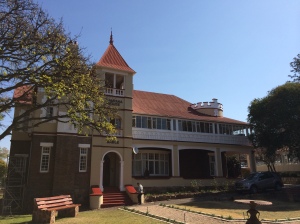 Belgravia, like Doornfontein, would later see a mass exodus of the wealthy as they moved north to Parktown. Many of the large mansions were demolished and large stands subdivided to make way for smaller houses to accommodate the burgeoning middle classes. Although Belgravia is still a residential suburb today, Jeppe is a mixture of commercial and industrial. Very few (if any) of the original houses west of the railway survive. Many houses became blocks of small flats – some of which still survive, while others became buildings, factories or shops – many of which still stand. Other areas close by like Troyeville and Bertrams were also attractive to the working middle class, who during the boom years, started looking for houses for their families. The poorer whites flocked to western suburbs like Fordsburg, Burgersdorp, Vrededorp, and Brickfields (Newtown). The even poorer black working class lived in mine compounds, locations near Vrededorp or simply in the veld in derelict buildings or abandoned claims.

The Star. 5 February 1972. ‘Historic homestead is now a school hostel’ by Denis Godfrey.