Map of Hillbrow and Hospital Hill 1897

On the 13 July 1893  a court ruled that the claim for the ground that would become Hillbrow belonged to J. Nicholls. He swiftly sold it to Transvaal Mortgage, Loan & Finance with which Sam Goldreich was associated. The ground was surveyed in 1894 and on the 20th May 1895 permission was received to change the claims to stands. The area north of Pretoria Street and east of Banket Street was laid out. Today, the area known as Hillbrow extends down to Wolmarans Street but it wasn’t always so (roughly covering the missing area on the above map). 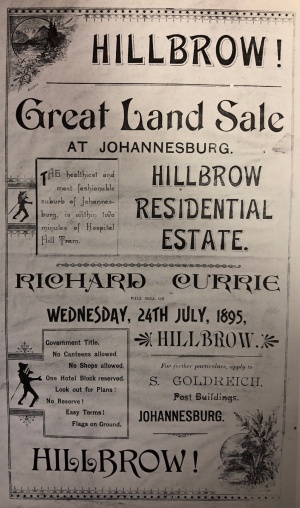 An advertisement appeared in The standard Diggers and News on 22 June 1895 for the sale of the estate on 24 July 1895 describing it as ‘property…on the brow of Hospital hill extending to Parktown and Berea Estate” There were 466 stands that went up for auction and sales went well. One of the conditions was that no canteens or shops were to be erected making it a fully residential suburb. The only shops that appear to have been built in the original Hillbrow area north of Pretoria street were the ones on Bruce and Quartz street and they look like they date from around 1910.

Old shops on the corner of Bruce and Quartz Streets 2015 (Source: Marc Latilla)

Additionally, the title-deed conditions read: All rights to minerals, precious stones etc. on or under the land were reserved to the crown. Owners were not allowed to sell or let their properties to coloured persons, not permit any coloured person other than a bona fide servant to reside on the property.

On the 5th March 1897 Hillbrow fell under the jurisdiction of the Johannesburg Sanitary Board and part of the township Johannesburg. 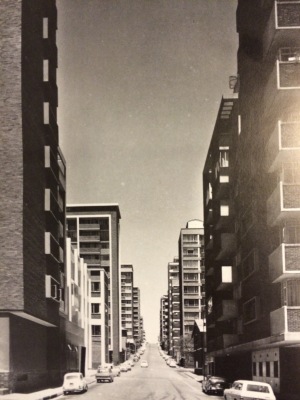 In the 1920s, due to advancements in construction techniques, multi-story buildings replaced some of the houses. After WW2, Hillbrow was still predominantly made up of houses. In 1946 the city council removed height restrictions which laid the foundation for the Hillbrow as we know it. 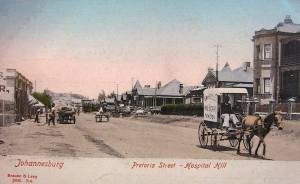 It started with the first building boom in the 1950s. Post-War, architects in Johannesburg were influenced by French architects Le Corbusier and Le Hevre and Brazilian Oscar Niemeyer. Much of this influence came together in Hillbrow with particular aspects of 1940 Martienssen House (53 Criden Bay Road Greenside) and Brazilian style coming together in apartment block Von Brandis Heights from 1952. A visiting architectural historian commented that Hillbrow was a ‘Little Brazil’. 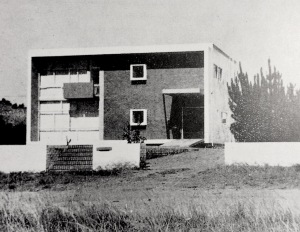 The late 1960s saw a second building boom in Hillbrow brought on by a good economy. This development dropped off by 1971 and by 1973, the number of flats exceeded demand. By the 1980’s, Hillbrow’s private houses were mostly gone and by the 1990s, the area was a very different place to its heyday. Do read Alan Morris’s ‘Bleakness & Light’ for an insight into Hillbrow from 1980s to today.

The Royal Johannesburg Golf Club’s first course was established in twelve weeks and opened in February 1891 behind the hospital in Hillbrow. It is said the first tee was in the vicinity where Clarendon Circle is and would have stretched down the valley along what would become Empire Road. It lasted only two months before moving to Jeppe. Members complained about the difficulty of getting to the course and that it was overly rough.

The circle shows the site of the first tee. At the time the area was just veld (Source: Watershed Town)

One of the first houses built in the original Hillbrow was one in Van der Merwe Street between Quartz and Claim Street. It was built and owned by Mr R. J. Nicholas. In a  newspaper article from 1971, his daughter recalled the house being in the middle of the veld and remembered the horse trams running up and down Claim Street. The property also had its own borehole and during the drought, people would come to the house with buckets for water. They moved away when the area started filling up in the early 1900s. It is possible that there is some connection between R. J. Nicholas and the original owner of the land, J. Nicholls.

One of the first houses in Hillbrow in Van Der Merwe Street (Source: Star/Chipkin archives) 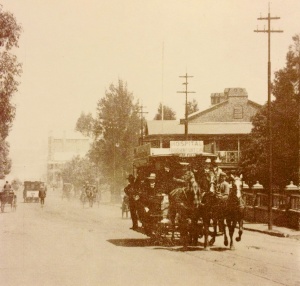 There are plans for various houses, cottages, and shops at the Africana Museum. Although the plans are dated, it is not known when (or if) the houses were actually built. 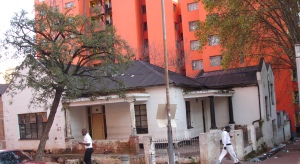 Existing house on Van Der Merwe street and Quartz not far from the where the first house would have been (Source: Marc Latilla)

Plans for a house on Goldreich Street

At 39 Pretoria Street, the current site of Elkam Building and once the home of Look & Listen and Cafe Three Sisters used to be a house which was built in 1917. It became known as ‘Little Y.W.C.A’ and was a hostel that accommodated 20 girls. The main Y.W.C.A, established in 1903, was at a building in 179 Jeppe street also built in 1917 which could accommodate 80 girls.

Captain Carl von Brandis built and lived in a little house named ‘Hanover Haus’ on the north-west corner of Twist and Pietersen Street in which he also died on 22 June 1903.

Looking north up Twist Street 1920s. Von Brandis’ house would have been in the centre on the left in front of the church. The German school is visible on the left next to the church (Source: Extraordinary 20th Century)

Von Brandis’ House on the corner of Twist & Pieterse Str

The Deutsche Schule Johannesburg (German school) was built in between Twist and Hol Street (Now called Edith Cavell) in 1897 with its foundation stone laid in April that year by Mrs. Rolfes. The gymnasium was completed in 1898 with both buildings designed by William Leck.

Also built in 1897 was the first parsonage designed by J. F. Kroll. It was sold to the school in 1936 and was demolished around the early 1970s (possibly at the same time as the school and gym) to make way for the Andre Huguenot Theatre (now the Hillbrow Theatre), German Consulate and a kindergarten. 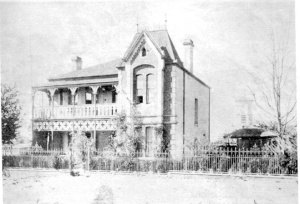 A second parsonage was added in 1936 designed by Gordon Leith. It appears that this house still stands and is used as an outreach centre (see below).

The school was founded earlier in 1890 by Pastor Kuschke who taught a small group of German children at the mission station in Marshall Street.

The German school existed until 1914 after which it was taken over by the government. In 1915 it was renamed Hospital Hill School (presumably due to the anti-German sentiment at the time) and became an English school. The Andre Huguenot Theatre now stands where the school stood.

Great early view looking south of the area showing the original school and Friedenskirche. Joubert Park is in the background.

In 1920, German classes started again at Friedenskirche, the German Lutheran church in Twist street. By 1922, the growing classes moved back to the original building. Also in the 1920s, Ockerse Street was closed and the road area divided amongst the school and church.

By the 1960s, the school was becoming too small and grounds were purchased in San Souci at the bottom of Parktown West. Construction started in 1967 and the school moved from Edith Cavell Street to its new buildings on 20 January 1969 where it still operates successfully today.

Friedenskirche or Church of Peace was built in 1912 opposite the German school. It was designed by Swiss architect Theophile Schaerer and served the German community until the early 1980s. It still stands and operates as a church as well as a community centre for disadvantaged Hillbrow residents. Its spire is still a striking landmark despite all the high-rise buildings. The church still stands as does what appears to be the minister’s house designed by Gordon Leith in 1936. According to Konrad Voges, it was Werner Wagner who designed the house. Wagner became a junior partner of Leith’s practice in 1935. The forerunner of this church appears to be the one that Pastor Kuschke started in the 1890s. It stood for 22 years, either in Main or Marshall Street, before being demolished. It was a simple A-frame building.

Around 1898 General Jan Smuts rented a house on the corner of Twist & Kotze Streets which is now Ingram’s Corner. It was once a famous pharmacy known as Fred Ingram. There was apparently a plaque on the building’s wall to commemorate this.

Ingram’s first chemist was in Braamfontein at 73 Smit Street. He appears to have moved his business to the corner of Twist & Kotze Street around 1909. The Hillbrow house was either demolished or converted, but the original Ingram’s Corner made way for a building of the same name which was completed in 1951 and designed by Cowin & Ellis.

Advert for the chemist from 1973

One of the Tannenbaum brothers of Adcock-Ingram fame was sent to run the Hillbrow chemist in the 1930s. It was there that Ingram’s Camphor cream was created by German chemist Hans Rose who on leaving SA, gave the recipe to Tannenbaum. 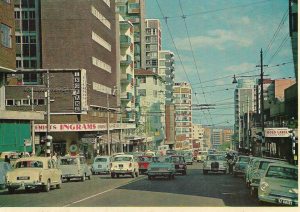 The next part of this piece will also cover some of Hillbrow’s heyday and show some pictures from December 2015.

Imerman’s was a men’s clothing outfitter on the corner of Claim and Kotze Street. Louis Imerman came from Russia and started the store in 1912 and later built a house next door. The original store was demolished in 1959 and replaced with a modern building that continued to house the business. It was still a going concern in the early 1980s. 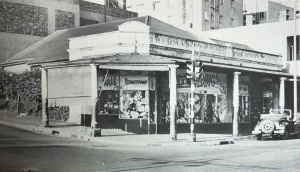 Reference for both parts will be covered in Pt.2

14 thoughts on “History of Hillbrow Pt.1”