A rare and detailed street map of Johannesburg from 1929

Holmden’s Street Map of Johannesburg and Suburbs, compiled by The Map Office and revised and brought up-to-date by Norman C. Dickie. 1929

*Click on the image for an expanded view. The file is 17MB and very detailed so it may take longer to open. 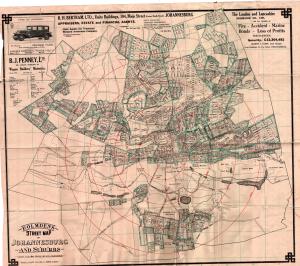 A few interesting points about this map:

~The red lines mark out the tram lines.

~Louis Botha Ave doesn’t start at Clarendon Circle (where Empire Road Starts). That part of the road south to the Old fort is still called East Ave. Where the road is now in front of the existing Brenthurst clinic, the Mason’s Hall, flats, and remaining Parktown mansion were once those properties gardens.

~Parktown as we know it now was completely different. Where the JCE precinct and JHB general hospital now stand were once turn of the century Victorian and Edwardian mansions. Several roads were lost in the 1970s like Connaught Road, St. Patrick’s Road, and St. George’s Road.

~There was once a road that cut through the zoo that is now gone.

~There was no M1 cutting through Parktown and Killarney. It roughly follows Oxford Road and then swallows a whole bunch of roads to the east including West Street. One can see the map is not entirely to scale when trying to trace the M1. It would be another 25-30 years before the highway would be built.

~Follow Oxford Road south to where it meets Jan Smuts Ave and one can trace the M2 going south up between Wits and the old showground and swallowing Graf and Wessels Streets in Braamfontein.

~There was no Barry Hertzog Ave as we know it. At the top end, it roughly follows Laurens Ave. The area where Milpark Clinic is today and north of that was all orchards.

~Westpark Cemetary, Mark’s Park, Emmerentia Dam, and botanical gardens are not there yet. Nor was Beyers Naude (previously D.F. Malan Drive) which used to be Main Road West & Mulders Road.

~Empire Road didn’t extend up to Kingsway where the SABC now is. That used to be Stanley Ave’s job.

~Aukland Park Sports Club & Racecourse is where UJ (previously RAU) and the hospital now is.

~The gasworks next to the Showground (the old Rand Show at Milner Park) wasn’t built yet. The old gasworks used to be in Newtown at the bottom of Diagonal Street

~There was no Sandton, Hyde Park, Craighall Park, Greenside, Emmerentia, Cyrildene, or Bedfordview yet amongst many others…

Special thanks to Gwyneth Thomas for sending me this map. She found it in a charity shop ‘for a pittance’ and had it scanned. She also dated the map by the car in the advert in the top left corner which is a 1929 Graham Paige.