1896 Map of Bertrams and Lorentzville

On 9 May 1889 Robertson Fuller Bertam (estate agent and stockbroker) leased a portion of land from the Bezhuidenhouts. The township laid out on the leased land was known as Bertram, and later as Bertramstown, appearing as such on an 1896 map. The suburb was meant to cash-in and catch the overflow from New Doornfontein. The streets didn’t line up and the grid-like pattern of the suburb did not have any space allocated for open spaces. It did initially attract wealthy buyers with the first stands selling in August 1889. Bertam left for the Cape in 1893 where he began the wine firm Bertams which still exists today. In June 1897, Bertramsville was incorporated into Johannesburg. The suburb then had 350 stands of varying sizes. The area including Judith’s Paarl and Lorentzville was previously used as farming land to produce vegetables for the town. 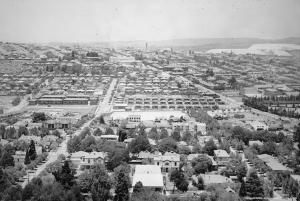 In 1902 the township was re-surveyed by H. A. Ortlepp and soon became an affordable residential area. In time, parts of the area started to degenerate into slum conditions. In the late 1930s a housing scheme was set-up on the southern portion. White residents were re-settled and in 1938 a complex of 70 houses and 48 flats were completed between Bertram, Frere and Queen street to become the Maurice Freeman Housing Scheme (named after the mayor who planned the slum clearance). Slum clearances happened around the same time in Doornfontein. These new housing schemes were predominately earmarked for poor white Afrikaners. These are almost identical to the municipal houses in Jan Hofmeyr behind Brixton Tower (and the location of early Die Antwoord video shoots). It seems that the council approved slum removals in the 1930s, with its forced removal and relocation of black and coloured residents to outside the city limits to make way for poor Afrikaner whites, paved the way for the forced removals of the 1950s – 1970s (like Sophiatown)

Named after property developer F. J. Chapman, this row of semi-detached houses was designed by H. Ibertson. The plans are dated 5 February 1905. Note the gables for each house. This practice of adding fancy gables and other front of house adornments would fall away in the coming years. 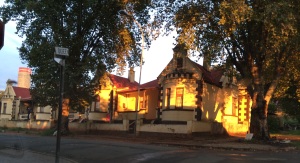 Scout founder Lord Baden-Powell is said to have stayed in Bertrams for a short time during the early 1900s after the Boer war. I suspect this was the house but have not found any supporting evidence. Baden-Powell has a fascinating military history. This piece on his connection with the Modderfontein Dynamite factory and early scouts by the South African Military History Society is a good read. 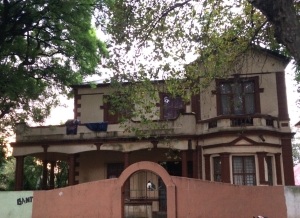 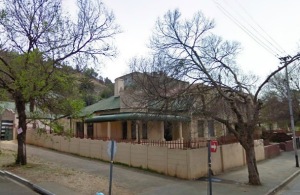 Fitzgerald Home for Aged in Gordon Road. The Woman’s Civic Benevolent Society was established in 1931 at Gerald Fitzpatrick House and was used as accommodation for “elderly gentlewoman who have limited income and who have no sons and daughters able to look after them”. There were 80 single rooms available. In 1935 an infirmary was established at the home for seven people. Interestingly, Mrs. Eric Rosenthal was on the board in 1941.

The Rand Youth Hostel was established in 1937 and was accommodation for low-paid male workers supported by the Union Department of Social Welfare. It could house 52 boys.

Bertrams Junior School was built in 1917 for the Transvaal Education Department. It was designed by government architect P. Eagle.

Like Doornfontein, Bertams had a sizeable Jewish community due to the influx of immigrants as explained in the piece below:

Despite such official anti-Semitic immigration sentiments, between 1924 and 1930 there was a noticeable rise in the immigration of Jewish refugees from Lithuania, Poland and Latvia to Johannesburg (Adler 1979:71). That a high percentage of these immigrants settled in the eastern suburbs of Johannesburg is clear from a 1936 survey which listed Doornfontein, Bertrams, and Jeppe as home to the single largest Jewish community on the Witwatersrand . What makes this significant is that almost twenty percent of workers in the area were manual labourers. This was predominantly a community of workers, not owners.

“Thus it can be established that between 1920 and 1940 there was a concentration of Jewish immigrant workers living in the Johannesburg suburbs of Doornfontein, Bertrams, and Jeppe. Their greatest significance, however, lies in the fact that they were immigrants and that a large proportion of them were manual labourers of the artisan class”.

As the second generation of better educated and entrepreneurial Jews moved away from Bertrams to the northern suburbs, the usage of the Shuls and Synagogues in the areas dropped. The Bertrams Synagogue (also known as the  Kimberly Road Shul) at 54 Kimberly Road closed in 1982 and is now a private residence. It was originally the Valley Bioscope.

This was the home of the Rabbi Dr Judah Leo Landau (23 April 1866 – 26 August 1942). Originally born in Galicia, he came to Johannesburg in 1903 after 3 years of being a Rabbi at the North Manchester Congregation. After arriving, he was appointed to lead the Johannesburg Hebrew Congregation. In 1915, when the JHC merged with the Witwatersrand Old Hebrew Congregation, he was declared Chief Rabbi of South Africa. He also officially opened the Great Synagogue on Wolmarans Street on 23 August 1914. His library of 5000 volumes constitutes the Landau Collection at the University of the Witwatersrand.

This is a collection of 17 houses in Erin Street that have been restored. Four houses backing on to Bertrams Road were demolished to make way for the Rea Vaya bus route. The houses date back to 1910-1914.

There are several interesting Art Deco flats in Bertrams. Luxor Mansions in Berea Street as well as the flats next to it were designed by S. V. Mann who also designed the Alhambra bioscope and the Poswohl synagogue. 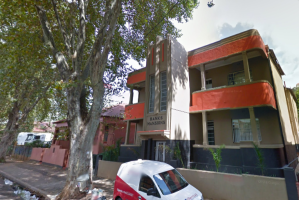 Various industrial business were set up along the Jukskei river devaluing land for residential purposes. Of those that still remain are an old steam laundry premises which have recently, along with 30 000 square metres of other industrial space, been transformed into Victoria Yards – a space for small businesses and arts and crafts. 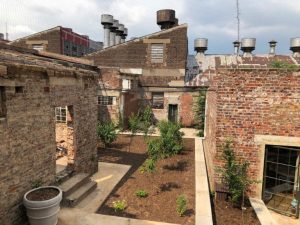 Just to the east of Bertrams is Lorentzville which was named after the Pretoria family who settled in the valley. The suburb dates back to 1892 when J. A. Muller leased part of the farm from F.J Bezhuidenhout. He then sublet it to J. G. van Boeschoten, J. Lorentz and R. F. Bertram. On 7 February 1893 this syndicate bought the freehold from Bezhuidenhout. Pritchard laid out the suburb and it was re-surveyed in 1902 but was only really developed into a decent middle-class suburb from 1910.

An early palatial house was Klooflands built in the 1890s by American mining engineer Joseph Curtis. His thinking was that the area (known as Bellevue Central) would become an exclusive suburb. By June 1911 he realised it wouldn’t and sold it to the Transvaal Consolidated Land & Exploration Company, which then made it part of Lorentzville. 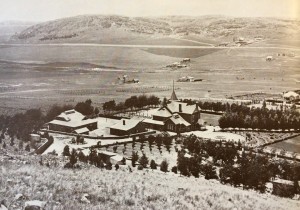 Carnarvon Road semi-detached houses: Erected by various speculators between 1905 and 1910 and were successful solutions to housing shortages before huge blocks of flats were thought of (perhaps also a forerunner to today’s townhouses) Semi detached houses found their way into many of the old suburbs like Bez Valley, Melville, Doornfontein, Troyeville. 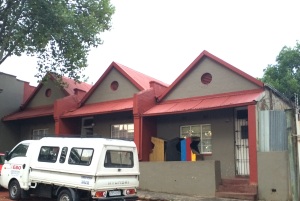 This suburb lies to the north and east of Lorentzville and is one of the few suburbs founded by an Afrikaans undertaking that includes several of the Bezhuidenhout clan (is it was part of their farm) It was named after F. J. Bezhuidenhout Snr’s wife Judith Cornelia Etresia and not their daughter as often claimed (the daughter was against the sale and development of that particular piece of the farm – calling it the ‘pearl of the farm’)

A horse-drawn service helped popularise the area. The terminus was at the end of Bez Valley at the corner of Ascot & First Streets.

The area became a solid but dull middle-class area.

There are a few houses of heritage value in Sydney Road although they are not in good shape. Also see examples of two other tin (or corrugated iron) houses nearby. The very first houses in Johannesburg were made of tin (affordable, available and easy to build) but very few have survived. Finding three in such close proximity must be rare. My understanding is that these tin structures are protected by heritage law. In 2017/2018 it was reported that one or more of these had been demolished. A visit to the site in September 2018 confirms the old houses have gone.

31 thoughts on “Bertrams and Lorentzville”