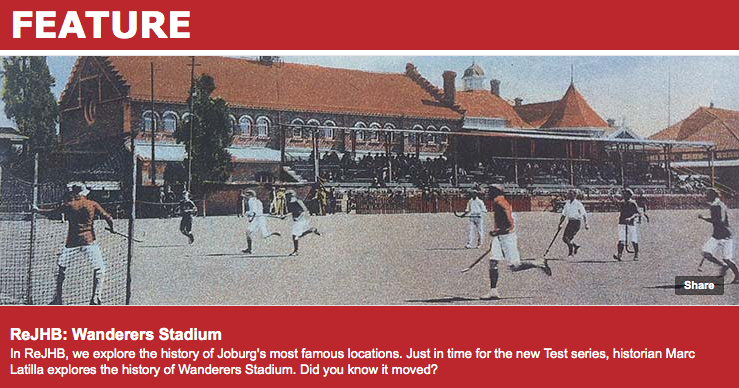 My latest piece for the ongoing series ReJHB on JHBlive inspired by the upcoming SA vs. INDIA cricket test has just been published. Check it out here. 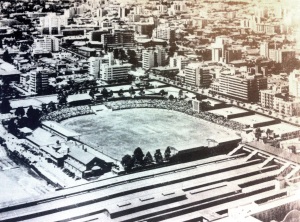 This fascinating picture comes from Arnold Benjamin’s ‘Lost Johannesburg’. It took a while to work out the position but if one looks closely, one can see the diagonal strip of the buildings at the top of the picture right next to the old fort. This is near the top end of the raandjeslaagte triangle that ends near Houghton. This means that the houses and buildings around the old stadium in this picture are of Braamfontein (briefly on the left) and the bottom end of Hillbrow (top and right). Joubert Park is just out of shot on the far right.

There were two major building booms in Johannesburg. This one depicted here in the 1930s and again in the 1950s. It is from these two booms that many of the flats and highrise apartments in Hillbrow and surrounds arose as well as the first townships. It was also during these booms that many potentially historic buildings (by today’s standard anyway) were demolished to make way for the new.  The piece below from http://www.sahistory.org.za explains the first boom as a result of South Africa abandoning the gold standard:

As the Great Depression set in, many countries (including Great Britain) abandoned their gold standard and devaluated their currencies. South Africa, however, (under General J.B.M. Hertzog) briefly maintained its gold standard and farmers were hard hit when the resulting spike in the cost of South African goods devastated exports, especially minerals and wool. Hertzog finally abandoned the gold standard on 27 December 1932. The move returned South Africa’s fortunes; gold prices increased and sparked a phase of economic expansion.

Soon after leaving the Gold Standard in 1932 revenue from the sale of gold increased remarkably well. Many historians have argued that as a result of this, the Johannesburg Municipality was able to raise money from both taxes and from providing housing for residents of the cities inner city slum yards that had been earmarked for removal for nearly a decade.

The municipality’s earlier attempts were thwarted as the residents could not be removed from the slums until alternative accommodation had been provided for them, and the Municipality could not provide alternative housing for lack of finances. The increased revenue from the sale of gold provided the finances required to achieve this. Following these developments, the first mass housing scheme for Blacks in Johannesburg was undertaken. This marked the birth of Orlando East, south of Johannesburg. In early 1933 the first group of families were removed from the inner city slum yards of Rooiyard in Doornfontein, Prospect Township (east of Johannesburg) and Bertrams. They were resettled in Orlando East. Apart from Klipspruit, Orlando East was the first major township part of the group of areas now known as Soweto.